Designed by British Hand Grenade innovator, William Mills during World War I, the realities of Trench warfare became very apparent. Mills created many of the early prototypes of Hand Grenade used not only by The British Army, but many other Nations. As with most Grenades, one had to expose oneself for a period after activation, to discharge or "throw" the Device. This exposure could prove to be fatal.

This exposure caused Mills to experiment with a Rifle Launched explosive Device which could be deployed from the "relative" safety of the Trench - with minimum exposure. Using his Patented "No. 23" Hand Grenade (similar to the much later "Pineapple" Device), Mills attached a brass mounting plate to the bottom of the Grenade. Hollowed, the two fused components were activated by a Primer Cap. The entire device was affixed to a 6 to 8-inch rod or "stabilizing bar".

Design to fit into the barrel of most British Infantry Rifles, the now dubbed "Mills Bomb", was slipped into a rifle barrel. A specially designed "Dummy Round" consisting of blackpowder and a Sabot Round (wood), when fired, would strike the bar - giving it momentum and trajectory.

The "difficult" part of operational cycle involved, was arming the Grenade. The Mills Bomb Rifle Grenade STILL needed to be activated prior to launch. This was accomplished by the traditional method of "pulling the Pin" (meaning to literally pulling the metal activation pin which disengaged The Primer"- activating the slow charge).

Normally, a 30-second period wad expected wad expected. Upon activation. Of the Grenade, the Device was "fired" from the Rifle. They could be aimed at a 45 to 90-degree angle. First deployed in modest numbers in 1915, The Mills Bomb became a fixture in British World War I Trench warfare through the the Conflict. 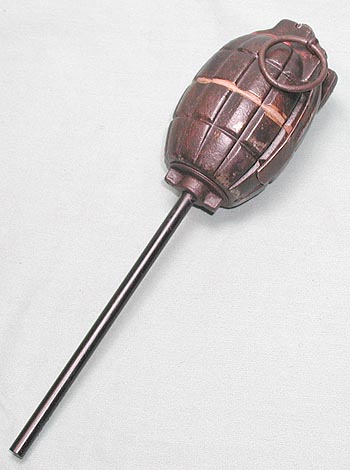