Developed by Hiram Maxim in 1885, The Maxim Heavy Machine Gun saw many Model variations in it's long career in The German (and others) Armed Forces (until 1959). The first version of the weapon wer mounted on modified Artillery Cassions. Later early 20th Century versions featured a more streamlined, Tripod mounted Gun. Popular in “Trench Warfare” in World War One, The Maxim was actually a British made weapon (and offshoot of The Vickers Gun). It was imported to over 40 Countries during it's first production run. Weighing 30-pounds, The Maxim required a Crew of 4 soldiers to operate. Barrels were close to 60-inches long and it fired the standard British .303 Round. Capable of maintaining 550 rounds per minutes, The Maxim had a 3,000 yard effective range (with a maximum of close to 4,500 yards). After World War One, The Company was re-absorbed back into The Vickers Company. 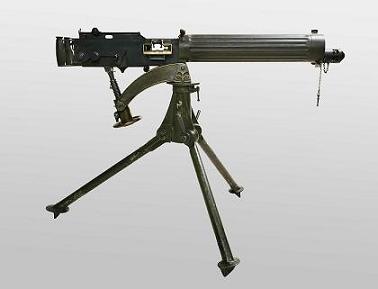