Designed to replace The Brodie Helmet of World War One, The Mark III was nicknamed "The Turtle" (Due to it's low set style on the head of the wearer). Although approved for combat use in 1941, it was not until 1944 - and The Normandy Invasion, that they were finally issued to British Troops. Made of one piece of stamped gauge steel, The Mark III provided 38% more protection to the head than the older Brodie. The once wide brim was shortened as well. Equipped with an adjustable chinstrap, a common problem with The Mark III was a lack of liner for the inside. Soldiers would place rubber on the inside as both insulate and to help with both fit and stabilization. The Mark III was painted Green or Dark Brown. It would remain Britain's primary issued protective headgear until the 1960s. 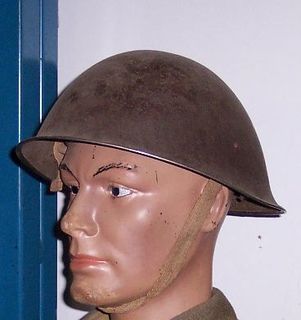