The Mark I Sub-Machine Gun, better known as "The Sten Gun", was a major British World War II firearm produced weapon. Designed by Major Reginald Shepherd in 1941, The Sten Gun was created in response to the debacle of Dunkirk. Many thousands of much needed small arms were lost in the evacuation of The British Army. The Sten Gun was very cheap and easy to produce (factory machine stamped components). The weapon featured only 47 pieces and was also easy to repair. The Sten also (as a sub-automatic weapon), had a high cyclic rate of fire (much more than the standard automatic, self-loading rifle). Although England had begun to purchase many hundreds of US made Thompson Model Machine Guns (they did not meet certain requirements of The British Army High Command.

The Sten Gun weighed 8-pounds and was 30-inches long. Using a 9mm round, it uses a side receiver mounted 32-round straight magazine clip. The Sten was a blowback operated weapon capable of a cyclic rate of 500 rounds per minute. The maximum effective range of the Sten was 100 meters. Popular with Paratroopers and Commando Forces (due to it's abilities), over 5 million models were produced. The Stent Gun would continue in service beyond World War II, remaining on British Army Arms inventories until 1966. 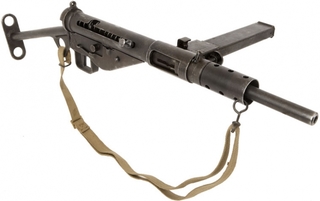