More readily known as The Mark I PIAT Weapon, this was a hand-held anti tank weapon used by The British Army during World War II, beginning in 1942. The PIAT gave the basic infantryman the ability to be a ''Tank Killer''. The PIAT was a hand-held weapon operated by a single Soldier. They weighed 30-pounds and were 40-inches in length. The PIAT was not envisioned as a ''shoulder fired'' weapon, but was fired from elevated positions or flat ground. The PIAT fired a shaped charge Spigot HEAT round to an effective range of 350-yards.

First deployed during the 1943 Invasion of Sicily (Italy) with British Forces, The PIAT was credited with causing much damage to both German Armor and SP Artillery. They were considered a worth adversary to Germany's Panzerfaust (a similar weapon). Over 115,000 were produced. Reusable and durable, The PIAT would be seen in use by many European Countries and would remain in use well into the 1950s. 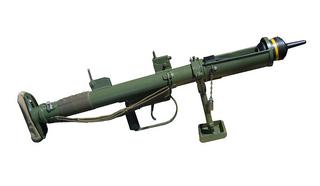