Over 20,000 M3 ''White'' Scout Cars were used by The British Army during World War II. They were produced between 1939 and 1944. The Armored Car was built by The White Motor Company in The United States as a War Export. The M3 saw European service as a Reconnaissance Scout Vehicle and as a Field Command Car. US Army General George Patton used a M3 during his Bulge Campaign of 1944. Models were also provided to most Allies during The War. Many post-War Models could be found still in service as late as 1975.

Weighing 5-tons, The M3 was 18-feet long and was a 4x4 Wheeled drive vehicle. They used a standard Hercules 6-cylinder gas Engine which had a maximum speed of 50-mph. Models were produced both enclosed (housing) and open. Typically, The M3 supported 5-inches of armor plate throughout. Armament was normally a single .50 Caliber Browning Machine Gun. The Vehicle could comfortably support (6) passengers. 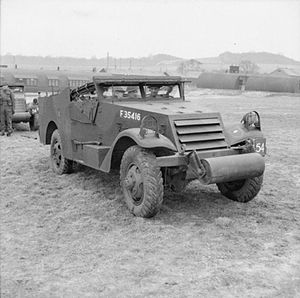