Designed off the Lanchester automobile of 1914, The Lanchester Armored Car was one of the most successful small Infantry support vehicles of World War I. Although Army versions were fielded, The Model 1915 was built primarily for The Royal Navy as a land support armored car. Considered a "mini-Tank", the entirety of the vehicle was fully enclosed and fitted with 1.5 inch plate armor. An attached fixed Turret was fitted with a Vickers .303 Machine Gun. 4 vulcanized pneumatic tires supported the chassis. Crewed by 3 to 4 Men, The Lanchester was a 6 cylinder engine capable of land speeds of up to 50 mph. Weighing just under a half ton, this speed factor was considered superior to most other models of Armored Cars fielded at the time. Only Rolls Royce Models were equal. Many were also purchased by Russia and Belgium for use with their Military. Lanchester's also saw service during several Antarctic Expeditions initiated by The British Royal Navy. 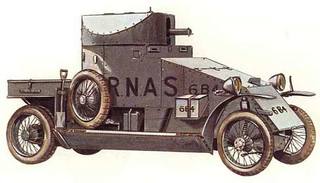