A late World War II variant of The ''Z'' Battery Multiple Launched Rocket System, The ''Mattress'' System (so named for the similarity to the launcher plate Front of The Device when loaded, as well as for the ''blanketing'' dispersal pattern), was a 1944 Anti-Personnel weapons system field by The British Army. The basic design was based upon both The German ''Nebelwerfer'' and Soviet ''Katyusha'' Mortar and Rocket Launchers, The ''Mattress'' System was a towed weapon. Deployed late, these weapons still saw active service when Allied Forces made their final push over The Rhine River, into Germany.

Weighing over 2,000-pounds, The ''Mattress'' launched up to 30 Cordite based Rockets (5-Inch Versions), 3,000-yards. Each Rocket weighed 70-pounds. They were deployed first as ''Batteries'' and later specially mounted on Troop Landing Craft. The first usage of The Landing Craft Version with The British Army was during The Normandy Invasion of 1944. Fired at a rate of 4 Rockets per second, The ''Mattress'' Launcher System was also effective against light fortifications and Armor, when used in ''blanketing'' techniques of multiple Launchers. 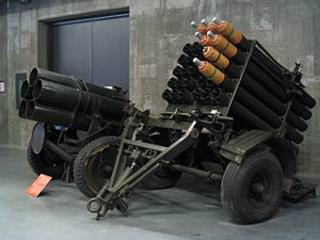