The unusual Killen-Walsh Armored Tractor was Prototyped in 1917. The Killen-Walsh Company were Farm Equipment Manufacturers, but they felt that a “new” design for Armored Vehicles was needed in World War I. They approached The British Army with an Armored Vehicle which was primarily an Artillery/Cannon Tractor. The Killen-Walsh featured a (4) Tracked System of propulsion. A separate Tracked System was mounted forward and rearward. Both were of independent suspension, which was thought – would improve maneuver over the rocky Terrain of France.

Capable of a top speed of 4-mph, The Killen-Walsh was 13-feet long and 8-feet in height (including suspension). It weighed 9,500-pounds and could hold 30-gallons of fuel. It's primary armament was a Vickers .303 Caliber Machine Gun, mounted in an enclosed compartment. The Killen was crewed by a Driver and Machine Gunner. Although The British Army passed on The Killen-Walsh, The Royal Navy saw it's use. They procured (20) of the Vehicle for use in Patrol outside of Coastal Bases. 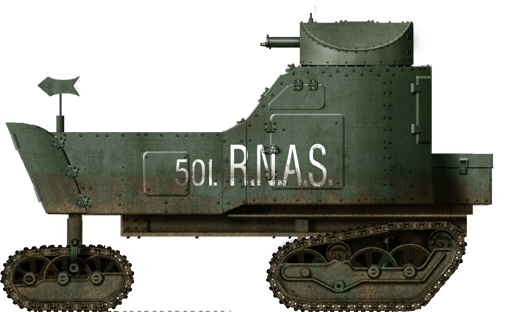