Cashing in on the popularity of the French Lefauxcheux and LeMat Revolvers, The Kerr Gun Company of England, began to manufacture a .44 Caliber model similar. The Kerr had an effective range of 800 feet. Popular with early Confederate Cavalry Units, over 10,000 Kerr's were imported from England into The South. With the tightening of The Naval Blockade, importing of The Kerr ceased. The weapon did not gain popularity in England with The British Army, and it was not produced after 1865. 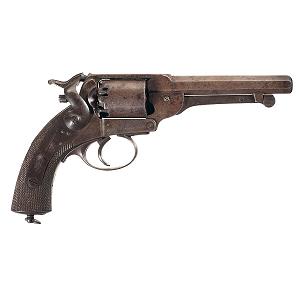