Having experimented with suitable uniform types since the beginning of The War, England realized that it's traditional “bright” colors could not be used in the battlefields and trenches. The need for more subdued colors (to blend into the battlefield) – was needed. Tans, Browns and Greens (in varying applications), (Woolen in construction) - were all adapted. The average British soldier was issued his “Kit”, which included everything that a soldier needed (or could carry) in the field (via Load Bearing Equipment). Issued the standard “Service Cap” (when not in direct combat), The American Uniform and British Uniform were almost identical in cut, design and issue. Great Britain. (like The US), would adopt (with refinements) – this uniform type forward in it's history (with variant still in use today). 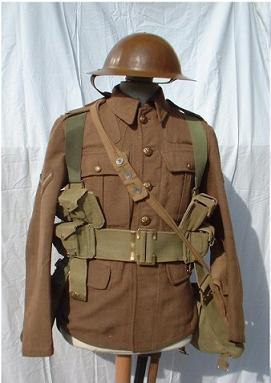