The Anti Tank No. 75 Hand Grenade, known as The Hawkins Bomb – was a British Army World War II explosive device devised after the disaster of Dunkirk (France, 1940). It was considered a more stable improvement over previous versions, and was cheaper and easier to produce. The Hawkins was produced in both a light metal and plastic casing. A ''crush detonated'' explosive, that is – pressure contact would crack the overall housing and release a chemical ampule (which in term caused the initial explosion). This provided the stability seen lacking in earlier War grenade versions.

The overall weight of The Hawkins was slightly over 2-pounds. They were 6-inches in length with a 3-inch width. This allowed for a Soldier to carry multiple devices with ease. The device became popular with The US Army, who began to issue a variant to it's Airborne Forces. The American version (known as The M-7), was seen in widespread use during The Normandy (France) Invasion of 1944. Due to the somewhat modular design, multiple devices could be strung together to increase blast effectiveness. It is unknown as exactly how many Hawkins and M-7 devices were produced. The popular design would remain in both Countries Arsenals until 1955. 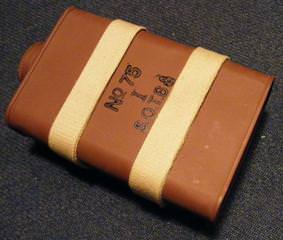