Developed in 1942, but not introduced until 1944, The Hawker "Tempest" was a low-altitude, Medium Bomber used by The Royal Air Force during World War II. Seen as a replacement for Hawker's "Typhoon" Fighter, The "Tempest" was used primarily as an Interceptor against Germany's V-1 Rockets being deployed against England. The "Tempest" proved effective against it's few shorties with Germany's Me-252 Jet Fighter  (in part to it's "low level" under carriage attack tactic. It was planned to deploy them against Japan, but The Pacific War ended.

Over 1,700 were produced. The "Tempest" was a single seater, that was 34-feet long with a 42-feet wingspan. Standard power performance was rate at 2,180 HP (with variants achieving up to 4,000 HP). The Fighter Bomber could achieve 432-mph with an operational range of 1,500-mph. The "Tempest" also had an operational ceiling of 37,000 feet with an impressive rate of climb of 4,700 feet per second. Armed with (4) 20mm Mark II Cannons. She could carry (2) 500-pound Bombs and up to (8) 76mm underwing Rockets. Of note, The "Tempest" was one if the first Fighters to experiment with a Cockpit canopy which opened the same as an automobile door  (outwards), as opposed to the standard "sliding" types used. 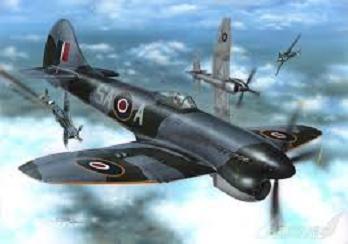