The Hawker Aircraft Company ''Sea Hawk'' Day Fighter was first deployed with The British Royal Navy in 1953. It was the first Jet Fighter produced by that Company – whose WWII Fighters were a staple of The British Military.

Over 500 of the reliable ''Sea Hawks'' were produced – which were also exported to other National Air Forces as well. Carrier based Fighters, they first saw combat action during The Suez Canal Crisis of 1956. The Fighter would serve with The British Navy until 1958 – with the last ''Sea Hawk'' retired in 1983 from The Indian Navy.

Piloted by (1), The Sea Hawk'' measured 40-feet in length with a wingspan of 40-feet as well. Power was provided from a single Rolls-Royce Nene 103 Turbojet, which produced a thrust of 5,200-IBF. Airspeed was rated at 600-mph with a 480-mile operational Mission range. The operational ceiling of The ''Sea Hawk'' was 44,000-feet.

Varied armament included (4) 20mm Cannon with the capability of deploying (20) non-guilded Rockets or 500-lbs of Ordnance. Several Squadrons were also equipped with The US AIM-9 ''Sidewinder'' (late in their carrier). 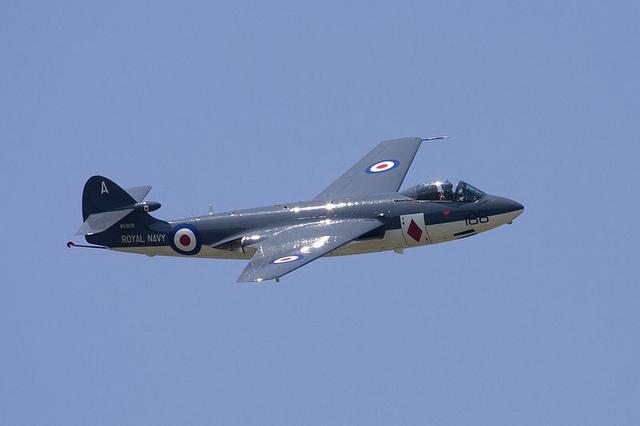