Nicknamed ''The Flying Suitcase'', The British Handley-Page HP.52 ''Hampden'' was an early World War II Medium Bomber, used by The Royal Air Forces. Not seen as a replacement for related Bombers in use, the augmented Bomber was among the first of British air assets to strike back at Germany in 1940. Over 1,400 Production Models were made and deployed. The Bomber served well until retired in 1943-1944. Crewed by (4), The HP.52 was 54-feet long with a 70-foot wingspan. Power came from (3) Bristol Pegasus 9-cylinder, air cooled Engines, capable of producing 1,000-HP each. Capable of close to 300-mph, The Hampden had a 1,700-mile operational range with a maximum altitude ceiling of 20,000-feet. Well protected, The HP.52 carried (1) .303 Machine Gun (Forward Mounted) and (5) additional .303 Machine Guns installed throughout the fuselage. 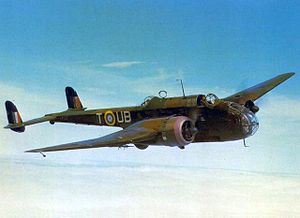