Although The Coldstream Guards are considered Senior to other Guard Units, it was actually The Grenadier Guards who “preceded” them by a full 4 years. “Officially”, they are considered Senior because of this. Formed in 1656 AS a Royal Regiment (in exile due to The Commonwealth), The Regiment became an “official” Royal Regiment in 1660. Like The Coldstream, The Grenadier have found in most of England's “early” European conflicts (War of Spanish Succession, War of Austrian Succession and The Seven Years War).

Their name “Grenadier” comes from a mistake. Unlike a traditional Grenadier – who was a mounted soldier who specialized in deploying grenades and throwing explosive devices, the Regiment was also present at Waterloo (Napoleonic Wars), holding the Line against the advancing French, they engaged (and defeated) Napoleons Chasseur's. The Chasseur uniform closely resembled that of his famed Grenadiers. As a result, “1st Regiment of Foot Guards” name was changed to “Grenadiers”. The Grenadiers too found extensively in The Crimean War and both World Wars. They too formed a Tank Regiment.

They participated in several modern Middle Eastern engagements as well. They too were the “Scarlet” Tunic with black trousers and of course The Bearskin Hat. The Regiment's Button “spacing” is identified as being equally spaced (not grouped). Their “Plum” is a White feather (worn on the Left of The Bearskin). Their Regimental insignia is an “exploding” Bomb (or shell), with flames protruding from the top (which is worn of their collar). Their Motto is “Evil Be to Him Who Thinks Evil” (in reference to The Order of The Garter). 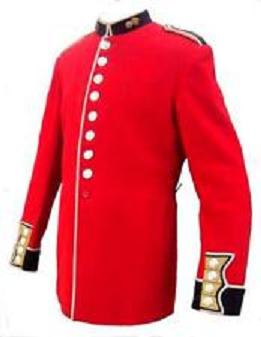