Designed by The British as an infantry support weapon/gun, The Grasshopper Cannon was a small cast bronze barrel gun. Designed to fire a 3-pound solid cannon shot, earlier designs would explode (due to design flaws) – killing the crews. The weapon would be pulled by it's crew by rope (for positioning). Due it's low profile (as opposed to the larger guns), and it's high jump recoil – it resembled the actions of the insect, the grasshopper (hence it's name). The gun had an effective range of around 1,100 yards. The Grasshopper was used effectively during The American Revolution against Colonial Forces and again during The War of 1812 (against against American Forces). The weapon would cease to be produced around the mid-19th Century with the advent of better infantry fire support systems. 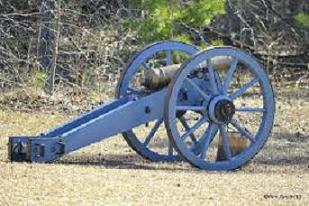