The British designed Gloster ''Gauntlet'' was an Inter-Period Fighter Aircraft, built before World War II. First flown in 1933, the Fighter was used as Interceptor-Patrol Aircraft for most of it's operational history. 250 Production Models were built. However, with technological advances in Fighter Aircraft advancing so quickly, the vast majority of ''Gauntlets'' were sold to Finland and Denmark. Many of these saw limited usage against Soviet Forces in 1943. By the end of The War in 1945 – all examples were either destroyed or unusable. The ''Gauntlet'' was flown by (1) and was 27-feet long. A Bi-winged aircraft, it's wingspan was 33-feet. Powered by a single Bristol-Mercury 9-cylinder Engine, this produced 650-HP. Airspeed was rated to 230-mph. Operation ceiling was 33,000-feet. The Gloster was armed with Twin .303 Caliber Vickers Machine Guns. 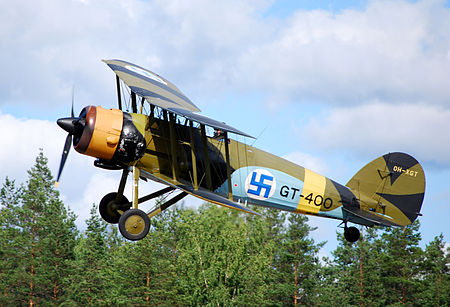