The British Number #82 Grenade – or ''Gammon Bomb'' was a variant of the earlier Number #74 ''Sticky Bomb''. This device was effective but highly dangerous to use (with a high rate of fatalities from just the simple act of placement). The 1943 Model Number #82 was seen as a better version (despite the fact that The ''Sticky'' would still be used). The Gammon Bomb was initially envisioned for use by British Airborne Forces and Commando Units, due to it's lightweight and easily carried design. The initial construction was a loose canvas ''bag shaped'' body. The arming devise was built into a conical metal top – which was attached.

A Top Cap was unscrewed (much as a bottle), into which was pre-packed up to 1 to 2-pounds of Composition 4 (Plastic) Explosive. Often ball bearing shot was also added when used as an anti-personnel device. The ability to ''shape'' the charge and direct the explosive effects of The Gammon made it very effective in covert/overt Operations. Detonation could be by direct impact or timed. The Gammon would remain in use until the end of The War in 1945. 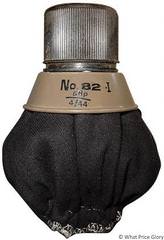