The British F-4 “Gloster Meteor” Fighter Jet was the only constructed and fully deployed Fighter Jet of The Allied Forces – towards the end of World War II. Seem as a counter to Germany’s Me-262 Fighter Jet (which was the only Jet Fighter to see actual Air Combat in The War) – the aptly named “Meteor” was first speculated as a Fighter design brought about by The Battle of Britain and the on-going V-1 and V-2 Rocket attacks happening over England in 1944.

The “Meteor” designs went back as far as 1943, but design costs and War Material procurement for it’s construction were pushed back due to the coming Allied Invasion of Normandy. Nonetheless, The RAF received it’s first prototype Jet Fighters in mid-1944. The first series of F-4s were deployed with No. 616 Squadron. The F-4 unfortunately never saw actual Air combat with The Luftwaffe Me-262, due to the changing tide of the direction of The War and The Allies quick advance into The German “Fatherland”.

Over 4,000 “Meteors” were produced up to 1955, with the Series and it’s many variants remaining in Service until the 1980s (as Trainers). The F-4 was also mass exported to Foreign Air Services throughout Central Europe and The Middle East (with it being the first Fighter Jet used by many fledgling Air Forces). Crewed by 1, The F-4 was 44-feet long with a 40-foot wingspan. It was powered by (2) Rolls Royce Derwint Turbojet Engines, capable of a maximum airspeed of 600-mph. The operational ceiling of The F-4 was 43,000-feet. The impressive “Meteor” could achieve 7,000-feet in 35-seconds. The armament carried varied from the standard deployment package of (4) 20mm Cannon. It could be configured for either (16) 3-inch or (8) 5-inch Rockets for at first Air to Ground and later Air to Air attacks. The F-5 could also support (2) 1,000-pound Bombs. 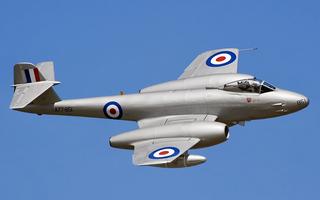