The specialized Ordnance Device known as The ''Bouncing Bomb'' was developed for use by The Royal Air Force's Demolition Squadron known as The “Dambusters'' (No. 617 Squadron). First used in “Operation: Chastise” (which targeted German Hydro-Electric Plants/Dams). The Devices were deployed by low-flying Aircraft and designed to “skip” or “roll'' across the surface of Water. After their travel (normally to within several hundred feet of a submerged Dam Wall), The Device sinks and detonates at a timed depth.

The Massive Devices weighted nearly 10,000-pounds and were 60-inches in length and 50-inches in width. Consisting of a hardened steel Casing, The “Drum Bomb” could achieve a velocity of close to 250-mph. Their “spin” was rated at 500 rotations per minute. They were effective up to 500-yards. Their detonation component featured a hydrostatic fusing system with a backup Chemical fuse. Both were timed to detonate at a depth of 30-feet. The “Drum” carried 6,600-pounds of explosive.

Due to weight, only (1) could be deployed per Aircraft. The 617 Squadron used modified Lancaster and Lincoln Medium and Heavy Bombers to deploy The “Drum'' Bomb. Deployment was accomplished by low-level “skipping” technique. Flying over a water source, The Device was released. It would literally “roll across and skip” over the water surface very much as one might achieve if they ''skipped” a flat stone across a lake. It took skill and training to accomplish this deployment tactic.

The “Drum” Bomb (which was part of the Massive Ordnance Weapons Systems), was also used to help sink The German Pocket Battleship “Tripitz''. Later in The War, a variation was developed known as The ''Baseball”, which was a 1,000-pound Device which was deployed very much the same manner. Not to be undone, Germany attempted to manufacture a similar Device The ''Kurt'' in 1944, but could not marry The Device with an adequate Aircraft for deployment. Several examples have survived. 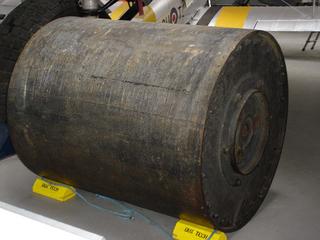