While ''Push Daggers'' can trace their origins to the 16th Century as a form of personal protection, they were somewhat revised as a type of personal combat weapon for the Trench warfare of World War I. While The British Army issued a form of Trench Knife (knife and Knuckle Duster), most soldiers developed their own forms of ''Trench Knives''. Both self-made and Factory Produced – The Dudley-Robbins Co. of London began to market their Push Dagger. It became a very popular item both purchased by British Soldiers themselves or brought by their Families as gifts.

The Dudley Dagger was made of non-polished metal – with a silver patina finish. Due to the danger of ''shine factor'' in the Trenches during a raid or Enemy Charge (especially if Moonlight was present), most soldiers painted or ''blackened'' both the blade and handle.n Unlike most Push Daggers that featured a small length handle that was ''T''-shaped, The Dudley featured a ''Pistol Grip'' handle with a ''D''-Type finger Guard. Unlike a standard knife or dagger, The Dudley Blade protruded from the top side of the handle (as opposed to the top). In this, the act of ''pushing'' was more realized. Blades were often much more slender (at 5-inches) and tapered (much as a Stiletto). Double edged, The Dudley could penetrate multiple layers of heavy uniform material (including a Trench Coat). 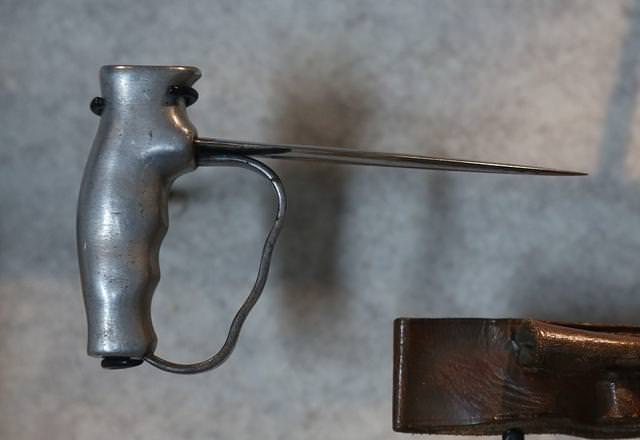