Pioneered by The British, the nicknamed “Disney Bomb” (after a stylized Cartoon Bomb seen in Walt Disney World War II propaganda Films0, was a ''Massive'' Ordnance Device on par with The “Cloudmaker” and “Grand Slam” Bombs. They were developed and deployed by The Royal Navy and Air Force late in The War (1945). The “Disney” Bomb was 4,500-pounds and 17-feet in length. They routinely carried Warheads of High-Explosive weighing 500-pounds. They were used to penetrate German Submarine Pens. These Bases were constructed of reinforced Steel and Concrete (roughly 12 to14-feet thick). The Bomb was deployed from a vast majority of Medium to Heavy Bombers (both American and British). Deployment involved height, and 20,000-feet was deemed ideal. Freefalling for a 30-second period, at 5,000-feet the internal Base Fuse (Timed) was activated. Reaching 3,000-feet, a rocket propulsion was ignited to increase overall velocity.

Reaching 1,450-mph – The “Disney” Bomb could easily penetrate Submarine Pens to the required 14-feet before they detonated. They were extremely effective at denying German many of it's Submarine repair and mooring Facilities. Although The “Disney” Bombs were discontinued after The War in 1945, their designs would go on to other innovative “Kinetic” and Rocket Powered Missiles deployed from Aircraft. 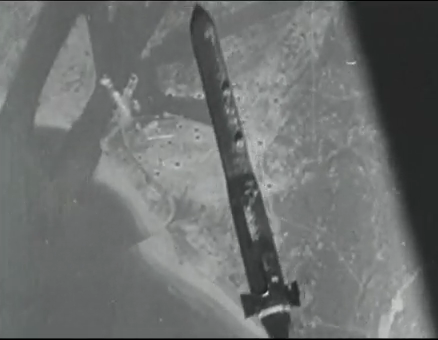