Introduced as a ''Multi-Purposed'' Jet Aircraft. The DH-112 ''Venom'' saw service as both a Night Fighter and Reconnaissance platform – for The Royal Air Force in 1952. The ''Venom'' is seen as part of England's 1st Generation of Fighter Jets (Interim). It lasted as an operational Fighter with The RAF until only 1962, when it became a popular export (Sweden purchased most Models for their Air Force). This was due to the rapid advances in Jet Fighter technology in the 1960s. The ''Sea Venom'' was a variant also developed for The Royal Navy as an early Carrier based Fighter. Crewed by (1), The DH-112 was 32-feet in length with a non-swept wingspan of 42-feet. They were powered by a single de Havilland ''Ghost'' 103 Turbo Jet Engine, with a 4,850 IBF Thrust. Rated at a maximum airspeed of over 600-mph, The ''Venom'' had a respectable operational Mission range of over 1,000-miles with an operational ceiling of 40,000-feet.

Armament packages varied, but (4) 20mm Hispano Wing Cannon were common. The DH-112 could support (8) RP-3 (60-pound) AA Rockets and could be configure to additional carry up to 2,000-pounds in Ordnance. Many examples of The ''Venom'' have survived throughout The World and are very popular ''Air Museum'' Models. 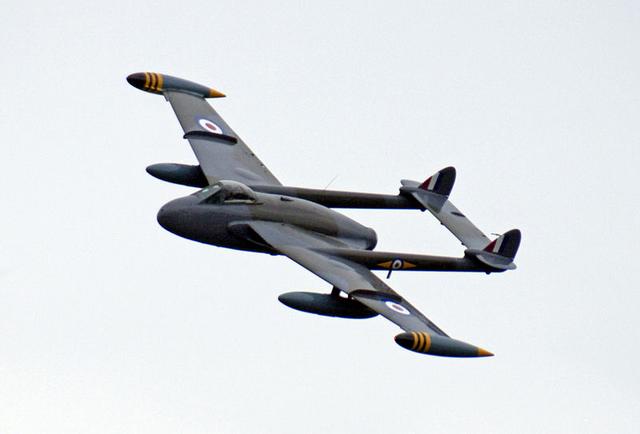