The British de Havilland ‘’Vampire’’ was a Multi-Purpose Jet Fighter, whose design started in late World War II. So successful was it’s general design, The Vampire would be introduced in 1946 and last (with other National Air Forces) until 1979.  The successful Export served as a multi-weapons aerial platform, which was considered a non-Nuclear Fighter. Piloted by (1) Pilot, The Vampire was 31-feet in length with a fixed wingspan of 40-feet. Using a Twin extension frame, The Vampire was powered by a single Turbojet de Havilland Goblin Engine, capable of 3,350-IBF of Thrust with a speed of 550-mph. Operational ceiling was rated to 43,000-feet and could range to over 1,100-miles. The basic (British) weapons deployment package was (8) 3-inch Rockets and (2) 500-lbs. Bombs. The Vampire also supported (4) 20mm Cannon. It used the very latest in 1960 and 1970s Avionics.  Versions for both the Royal Air Force and Navy were deployed. 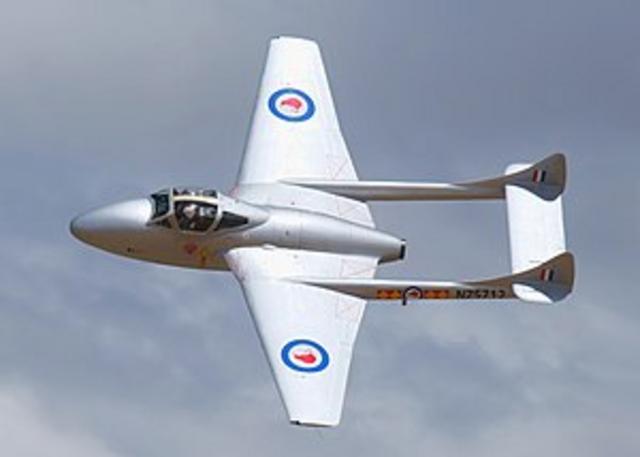