First deployed in 1941, The de Havilland D98 “Mosquito” was a Multi-purposed Bomber. Unique in that early Models were made almost entirely out of wood, they were nicknamed The “Wooden Wonder” and “Mossie” by it's Pilots. The de Havilland 98 could be used as a Light Bomber and Night Fighter, and were first deployed as “Nuisance” Bombers – deploying 4,000-pound Bombs. The Royal Navy adopted The D98 for Coastal duties, using them to Patrol and engage German U-Boats. Noted for their high-speed, The German Luftwaffe had great diffuculties in intercepting them over England – especially at Night. The D98 would remain with The Royal air Force until the 1950s, when she finally replaced by The “Canberra” Jet Fighter. Crewed by 2, The “Mosquito” was 41-feet long with a wingspan of 55-feet. Her operational ceiling was 30,000-feet. She used Twin Merlin V-12 Engines capable of producing over 1,000-HP each. Thr D98 could achieve a speed of 360-mph. Her armament included (4) 20mm Fuselage Cannon and was equipped with then State of The Art avionic Radar Systems. 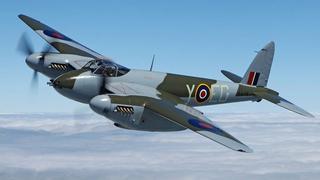