The British de Havilland ''Tiger Moth'' D-82 was an Interim Period Fighter-Trainer, first introduced in 1932. A ''Primary Trainer'' for The Royal Air Force, The D-82 was also used by several other Commonwealth Nations. Almost 9,000 Production Models were deployed, with the last official training flight with this Model being flown in 1969. Noted for it's ''heavy tail'' drag, regardless – The D-82 was seen as an easy to fly and reliable Trainer. At least (10) variations were also developed. Several were also captured by German Forces, who also used them as a Trainer Craft. Piloted by (2), The ''Tiger Moth'' was 24-feet long with a Bi-Wingspan of 30-feet. Powered by (1) de Havilland 4-Cylinder Engine, it produced 130-HP and had a rated airspeed of 110-mph. The D-82 had an operational ceiling of 14,000-feet. Gun Armament varied as well as it's ability to serve as a Ground Support Bomber (capable of carrying up to 800-lbs.) 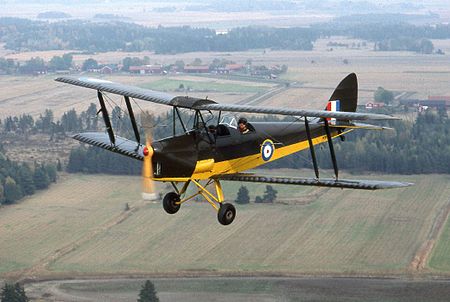