A British development in Tank Warfare, which took place between World Wars – The “Cruiser” Classification of Armored Tanks, was a form of both Infantry Support and Cavalry Scout Vehicle deployment. It had become very apparent that traditional Cavalry (Horses) were outdated on the “Modern” battlefield of the 1920s and 30s. Armored Vehicles had established themselves as the Weapon of The Future. Most Countries began to develop various Prototypes for possible mass production.

“Cruiser” Classes were made as “Light” and “Heavy” Armored Vehicles. “Heavy” were used in Infantry Support with “Light” serving as Cavalry. Most of these Armed Vehicles featured much small Caliber Guns (2-Pounder) and featured much less (thick) Armor plating. Both used Diesel. The Lighter Versions were best known for their deployment in North Africa against German Panzer Leader Erwin Rommel.

The “Cruiser” Design was copied by many European Countries (other than Germany and Japan), in World War II. In England, The “Cromwell” and “Crusader” were two of the more popular and mass produced Cruiser designs. Used up to 1955, The Cruiser Classification would go one to form the basis of Britain's modern Battle Tanks. 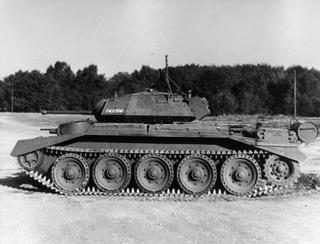