An experiment based on an earlier attempt at using American Colonial Slaves as Foreign Service Soldiers by The British Military, The Corps. of Colonial Marines was created in 1808. They would officially exist until 1816. The Corps. of Colonial Marines was not associated with The British Royal Marine Corps. (sharing a Title, only). The earlier attempt at using former Slaves as combat soldiers occurred during The American Revolutionary War (1775-1783). British Forces in Occupation would recruit American Slaves to serve in select Rifle Regiments – all with the promise of freedom, when and if Great Britain won The War. In most cases, those serving – found life somewhat ''difficult'' AFTER The War, with many fleeing to Canada or far North (where they were still in essence, free). Even Colonial Patriot Forces experimented with this force of Recruitment for Freedom process (as seen with the previously written 2nd Rhode Island Regiment).

The British Corps. of Colonial Marine was seen as a viable replacement and augmentation to The West Indian Regiments raised and stationed in The Caribbean (a similar Slave Force raised). The bulk of The Corps. Was trained and sent into Florida to occupy older Spanish Fortifications. In some cases, newer earthern fortifications were constructed for their use. With the start of The War of 1812 (another conflict between The US and Great Britain), a more sizable detachment of Colonial Marines was stationed again in Florida (then a semi-protectorate under Spain with it's own ''rebellion'' brewing with American Colonists). The British Military was hoping to both deprive Spain of it's last ''New World'' possession in North America as well as a possible permanent foothold in America (again).

With the end of hostilities, Great Britain in essence – abandoned it's Colonial Force, disbanding them in place. Some would go to The Caribbean again – join the still active West Indian Forces. The remainder would go on to join with The Seminole Native Americans in Florida, in their future resistance to The US Government during The Seminole Indian Wars of the 1830s thru 1840s. The British Colonial Marine were uniformed much differently from The British Army and it's components. Although a ''Scarlet Coat'' was used for formal inspection, the traditional uniform was a Buff White with Green trim. They had no formal ''Honorary'' Colors and used the Union Jack as their Regimental identifier. 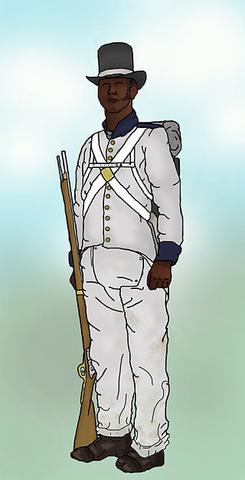