Invented by Sir William Congreve in 1804, he had observed the early use of "Asian" rocketry in the conflicts between The British East India Company and The Mysore Indians (Hindu). The Mysorean Rockets were very effective (so much so that Congreve set about re-inventing his own version for British military use). Originally constructed of heavy cardboard (with obvious bad results), lighter iron sheeting rockets were soon developed. The rockets were elongated and conical in shape (tapering to a point). Filled with gunpowder to match artillery poundage measurements, the weapon had fixed fuses extending outward (beyond the rear end of the rocket proper). Side mounting brackets attached the shell to a long wooden "firing stake" (or in some cases, arranged in lines and installed into a primitive form of wooden firing box). The "Firing Box" was a precursor to the Multiple Rocket Launchers of the 20th Century.

Launch Poles (the most common form deployed), were between 25 to 27 feet long. There were 3 classes of Rocket: Light, Medium and Heavy. The Heavy version was capable of launching a 300-pound shell some 2,000 yards. This created arguments between traditional Artillerists and Rocketmen. Artillery was roughly the same in yardage and suffered no where near the dangers of a Rocket Battery. Misfires and accidental explosions were quite common. The short fuses were lit via a slow match device. Another problem was accuracy with regards to trajectory impact. Without a "guidance system", often The Congreve's would fly off target.

Still for all their problems, The Congreve was used quite regularly during The Napoleonic Wars and several times against American Forces during The War of 1812 (The Battle of New Orleans). In fact, The National Anthem of The United States was based on a Congreve Rocket attack against Fort McHenry (Maryland/US). Congreve Rockets (with some minor improvements), continued onward until the 1830s.Their initial design and innovations would move military technology closer to the more reliable missile systems of the 20th Century. 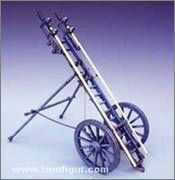