Although an “Active” Component of Great Britain's Army, The Coldstream Guards also provide Ceremonial duties for The Sovereign (Queen) and Heads of State. Iconic and World renown for their uniform, they provide security to various Buildings used by The Queen (namely Buckingham Palace). As Guard Mount, they provide guard functions of said structures. Senior and part of 5 similar Guard Regiments, they (like the others) are identified by several “subtle” differences. Most Guard Regiments are identified by the spacing of their uniform Tunic buttons, insignia device on their collar and plumage (or feather) on the iconic “Bearskin” Hat (Helmet).

The Coldstream Guard is the oldest of The Guards Regiments (and at one point WERE The British Army. Established in 1650, The Coldstream were part of Oliver Cromwell's “New Model Army” (The Commonwealth Period). Due to their performance during The Fifth Monarchist Rebellion (1661), they entered into Royal Service. The Regiment saw service in various European engagements (even serving in The American Revolution). They participated in The Napoleonic Wars – and were present with Wellington at The Battle for Hougoumont Farm (Waterloo). It was The Coldstream who defended this simple structure form the onslaught of Napoleon's “Old Guard”.

The Coldstream Guard have participate in almost all of England's Wars and interventions (even providing an Tank Regiment during WWI). They continue to rotate into the current Middle East Conflicts when required. The Regiment is also known for it's participation in the British Military Tradition of the “Trooping of The Colors”. Although military in origin, this mass Parade is now performed to mark The Queen's Birthday. Their uniform, like all other Guard Regiments – consists of a Red (Scarlet) Tunic with Black Trousers. They were the Ceremonial Black “Bearskin” Hat.

As stated, their Tunic Button “spacing” is identified as a series of pairs - or “2s”. The Regimental Crest is a Silver “Sunburst” with The Order of The Garter insignia placed center. It is this insignia that is worn on the collars of all Coldtream Guards. Their identifying “Plum” (feather), is located on the right side of The Bearskin Hat, and is Red in color. The Regiments Motto is “Second To None”. 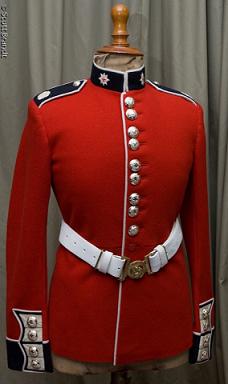