The Bristol Fighter was another fighter developed independently of The Sopwith Aviation Company. Developed in 1916, The Bristol was nicknamed “Biff” by it's Pilots. It's initial “slender” body designed proved a problem at first. However it's overall ability in the air as a fighter quickly replaced and doubt of “Pilot protection”. Designed to hold 2 crewman (a Pilot and Gunner/Observer), The Bristol was 25 feet long with a (multi) wingspan of 40 feet. She was able to make 124 miles per hour. The Bristol had a “low ceiling” operation of 5,000 feet. She was armed with a single 7.7mm Vickers Machine Gun to the front and (1) Lewis Gun – in the rear. Over 5,500 were made for overseas sales (of which America was a main source). 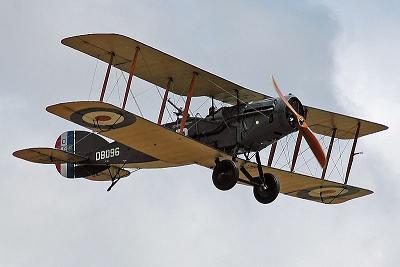