Merged into their present form in 1969 from both The 1st Royal Dragoons (The Oxfords) and The Royal Horse Guards, The “Blues and Royals” are a component of The British Monarchy’s Royal Household Cavalry. They were formed in 1760 as a Royal Cavalry Regiment. The Regiment (given responsibilities for protection of The Monarch’s Residence), served with distinction in many of Britain’s Wars – to include The Crimean War, The Sudan, The Boer War, World War I and II. Detachments have even been deployed to The Iraq War.

The Regiment is identified by it’s Dark Blue Tunic and distinctive Curiass Breastplate. They wear a Mitre-Style Helmet with a Red Plume. Their uniform is closely patterned after their Crimean War uniform issue. Unlike other Regiments in The British Army, Blues and Royals do not use the Rank of Lieutenant – but are rather identified as “Coronets”. Other differences are there are no Sergeants in The Blues and Royals, using “Corporal” for all Non-Commissioned Titles. Conversely, Blues and Royals use the Title of Trooper instead of “Private”. They, as do their Sister Regiment The Life Guards – uses the Cavalry Saber as the traditional ceremonial weapon.

Their Motto is “Evil Be To Him Who Thinks Evil”, with their official Regimental Colors being Blue and Maroon. Their nickname is “The Tin Bellies”, a derisive joke relating to their Curiass Breastplates that they wear for full ceremonies. The Blues and Royals (much as The Royal Life Guards), are a major fixture of Royal Ceremonial Duties both in and around Buckingham Palace. They are seconded only to The Coldstream Guards in terms of seniority in The British Army. 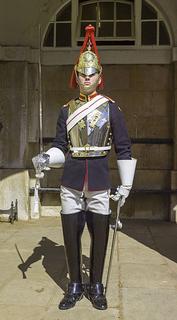