The use of “Admiralty Scaffolding” was a common practice in World War II England. Developed in 1940-41, they were in response to the very real prospect of a German Invasion from The English Channel. By design, these were iron Poles, connected to for box-like patterns. They so resembled Painter Scaffolding, that – coupled with their pioneering by The British Admiralty, earned them the name “Admiralty Scaffolding”. Placed along Coastal locations, Eddies and Beachfront, they were seen to hopefully snag any potential German Landing Craft (much in the same way that Germany used massive iron “X”-Bars along the beaches of Normandy in 1944).

Unfortunately, it was soon determined that the many miles of Scaffolding was ineffective (in tests) against the crashing motion of Landing Craft. They were seen however, to be effective against Armored Vehicles (such as Tanks). With no invasion forthcoming, The Admiralty Scaffolding would remain for many years until most were removed by the 1950s. Some (which have sunk firmly into the sands over the years) – still remain. 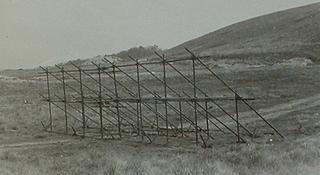