The A-33 ''Excelsior'' Heavy Tank was a British experiment production developed during World War II to counter Heavy German Tank's then in use. Seen as an augment to the ''Churchill'' Tank, various problems with handling developed and only (2) Production prototypes were ever made. The A-33 was meant to also provide support to Infantry movements.

A low-profile overall design – The A-33 was 40-tons in weight. They were 23-feet long with a width of 12-feet. Height was 8-feet and it supported (5) Operators. A Dual Track, The ''Excelsior'' was powered by a Rolls-Royce V-12 Meteor Engine, capable of 25-mph on open terrain. Armament included a 75mm Main Gun with Twin Besa 7.62mm Machine Guns. Armor plating was 4-inches throughout. One of the Two prototypes have survived as a Museum piece. 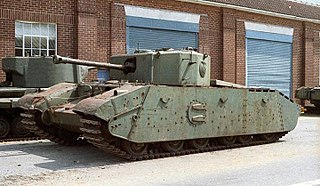