The A-22, nicknamed "The Churchill", was one of England's principle Battle Tanks. Produced in 1941, The A-22 was a Heavy, close Infantry support vehicle designed and built by Harland & Wolff of Belfast, Ireland. The Firm was known to history as building all of The White Star Passenger Liners, most notably - The legendary RMS ''Titanic''. 7,400 A-22s were built. Weighing 40 tons, it was 25 feet long, 11 feet wide and almost 10 feet tall. Able to crew 5, The Churchill was known for it's heavy Armor plating. Original Models featured 0.63 to 4 inches of bolted steel plates (with later versions actually 6-inches and welded by 1943). Unfortunately, although they could withstand the dreaded Panzer 88mm Main Gun, their shape (basically a rectangle), needed to be sloping (for deflection). As a result, The A-22 had issues with "concussive" damage to the crew. The A-22 also was only fitted with a 40 mm Main Gun (dubbed a 2-pounder, with a 1,000 yard range). This gun could not go "blow for blow" against the panzers. Still, it was a highly effective mobile platform for Infantry support. The 300 HP, 13 Cylinder Engine generated only 16 mph, due to it's weight. The Churchill was highly instrumental in the North African Campaigns of 1942 to 1944. The A-22 would continue to be deployed by England up to 1952. 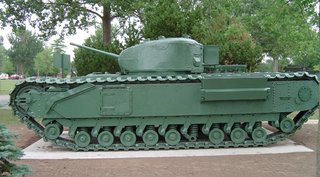