Modified from French designs, The British 9.45-Inch Heavy Mortar was a common Trench warfare artillery piece used during World War I. It was used by both Britain and it’s Commonwealth Nations. First built and pressed into combat service in 1915, The ‘’Flying Pig’’ as it was nicknamed – was mass produced and sent to The Western Front. Over 700 were made.
Weighing over 1,600-pounds, the aptly named ‘’Pig’’ required a Crew of (7). It featured a 6-foot long barrel which could fire a 150-pound, High Explosive Shell. It had an effective range of 2,400-yards. The ‘’Pig’’ had a maximum traverse of 45-degrees. Shells also had a type of propellant charge which allowed for the shell to “sail’’ to it’s target at a greater distance (unlike most trench mortars of the day).

Due to the required wooden reinforcement planking that had to be built, time and effort was needed to place and deploy the heavy mortar. This meant that should a trench be over ran, the  weapon would be left behind (often spiked with explosives down the barrel). With the increasing reliance on aircraft for bombing and far range artillery, the need for The ‘’Pig’’ diminished, so that by the end of the War, most were pulled from Service. 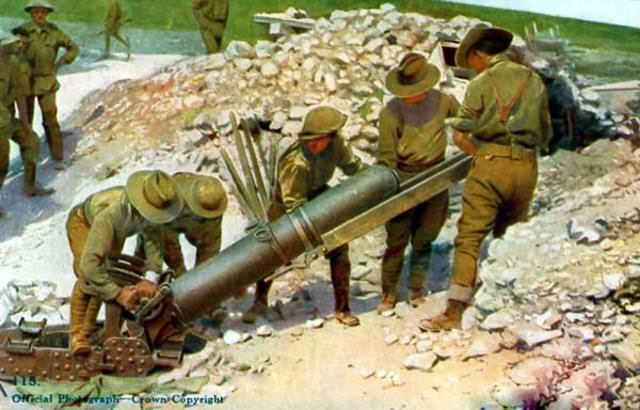