Formed in 1791 in Scotland, The 90th Regiment of Foot was a component of The British Army. They were raised in direct response to The French Revolutionary War. They wore the standard British Scarlet uniform (with white or buff trousers). They used the traditional infantry weapons of the British Army during that period. They were stationed in Egypt and The British West Indies (seeing no Napoleonic War service). They did participate in The War of 1812 against America (in Canada). They served with distinction during The Xhosa War (Africa) in 1846 (against Xhosa Tribesmen). The 90th was deployed to The Crimean War in the 1850s. Their next deployment was to India to participate in The Indian Mutinies (in which 6 members of The Regiment won The Victoria Cross for gallantry). Called again to Africa in the 1870s, The Regiment saw service against The Zulu during The Anglo-Zulu War. In 1881, they were merged into The Cameronian Scottish Rifles. Again awaiting merging in 1968 - the used was eventually disbanded. 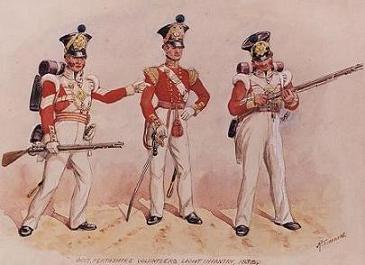