Developed in 1846 in response to the need for more effective firepower for use against the rise of heavily armored and ironclad warships, The 68-Pounder Gun was a cast iron weapon. They were smoothbore and cheap to produce. Models were made in both 9 and 10-foor barrel versions. Weighing in at 1,900 pounds, they could fire a 68-pound shell to a maximum effective range of 3,600 yards. Requiring a crew of between 9 and 18 (depending on ship or coastal defense use). These guns were breech loaders and mounted on specially designed sled carriages (for mobility). They were very popular and were in British service until 1861.

Considered one of the finest smoothbore guns ever made, they could fire solid, hollow, canister and grapeshot. They even test fired the Martin Liquid Iron Shell. This shell was filled with molten lead (which heated upon firing). Thus, upon impact - an incendiary (or fire) effect was produced. This was a "modern" take on the ancient Greek Fire. 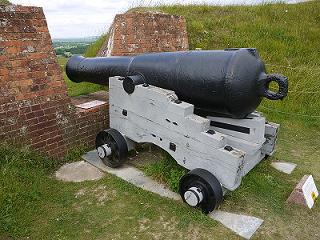