This English Infantry Regiment was formed in 1689. They served in The Seven Years War,  The War of American Independence and The Peninsular War (after which they were disbanded). Reconstituted  in the 1820s, they would eventually take part in The Indian Mutiny (India), finally being stationed on the Isle of Malta. The Regiment was deployed to Africa at the start of The Zulu War (1870s). The majority of the Regiment was all but destroyed at The Battle of Isandlwana - when they were attacked by a vastly superior Native Zulu force of some 22,000. Irregardless, a surviving Company (2/24th) mounted a valiant fight against some 5,000 Zulu's at The Battle of Rourke's Drift (holding out until relieved).

The Regiment was renamed The South Wales Borderers in 1881 and saw service in The Boar War, Egypt and Burma. They were also assigned to guard duties in China during The Boxer Rebellion and extensive service during World War I. The Regiment was sent into Ireland during The War for Irish Independence and saw service against the forces of Michael Collins. They saw service in World War II. They were incorporated into other Welsh Units in 1969 to become The Royal Regiment of Wales (24th/41st Foot). 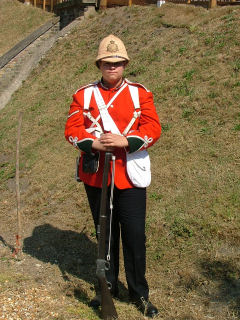