Formed in 1685, The King's 1st Dragoon Guard was a Horse Regiment – which fought in many of England's Wars since that time until they became an Armor (Tank) Regiment in World War I. They would exist until 1959, when The Regiment was amalgamated with several other to form The Queen's 1st Dragoon Guard (of which they remain today). During The later phases of The Anglo-Zulu War of 1879, The King's Dragoon Guard were part of The British response to the debacle of Isandlhwana. One Regiment was sent from England to The Cape Colony to bolster Forces there.

The Guard fought in several Battles (in both a Mounted and Dismounted Infantry role). Their claim to fame was at The Battle of Ulundi (1879). A Detachment of The Dragoons Guards stormed The Royal Kraal of Zulu King Cetshwayo, capturing Him. As such, lacking a Leader – The Zulu's would surrender, ending The War. The Dragoon Guard wore the traditional Scarlet Tunic with Blue Trousers and Blue Trim. The standard Colonial Pith Helmet was worn. As a Class of Cavalry, The Guard used Cavalry Carbines, Pistol and Sabre. The Dragoon Guards received Royal Battle Honors for their Colors (Flag), as a result of their actions at Ulundi. 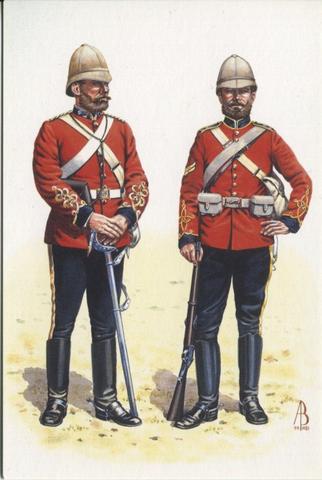