An early venture in armored car technology, the 1906 Simms War Car was first experimented with during The Boer War (South Africa, 1899). The idea of Frederick Simms (who was responsible for the first marketable motor car in Britain), The War Car wad envisioned in two varieties. The first version was a 4 wheeled, vulcanized rubber pneumatic tire, in which each was 4 feet in diameter. A 1/2 inch steel cowling completely covered the entirety of the vehicle. Access into the interior was only available by an exterior ladder. Using a 1.5 HP Engine, The War Car had a top speed of 9 mph. It held up to 10 men and wad armed with traversing Vicker and Lewis Machine Guns. A "rail version" that incorporated specially designed tires slotted for train tracks, was also attempted. This version featured a more powerful 12 HP Engine and could reach speeds of up to 20 mph. The British Army decided not to incorporate The War Car into it's inventory. It saw no war service, but it's basic design idea would be used in other armored designs. 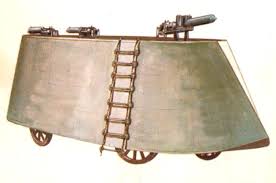