Miscalculating Boer deployment and organization, The 18th Hussars were present at the first battle of The War, Talana Hill (1899). They charged a Boer Artillery position and suffered heavy casualties. 250 Officers and Men would be ultimately captured by The Boers. After being re-formed, The 18th would participate in The Defense of Ladysmith (1900). 500 of The Regiment would be sent home soon after.

The Dress Uniform of The Regiment was Dark Blue with Yellow and Gold Facings. They wore the Khaki and Brown fatigue uniform for most of their engagements of The War. Both ''Bush Hat'' and Pith helmet were ultimately used at some point in their deployment to South Africa. The ''Pillbox'' Hat was the Duty Cap (most times). The Regiment used a wide variety of British Cavalry Carbines, Sabre and Pistol. 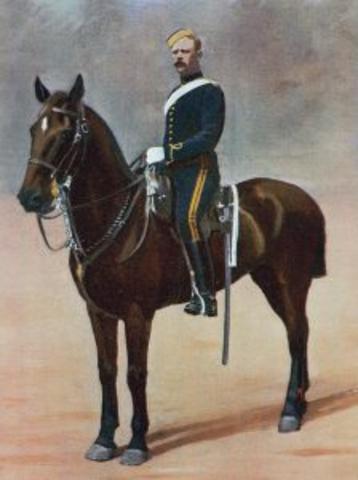