Brigantines were among the first ships to feature a fulled rigged sail systems (important for wind power). Canvas is seen on all Masts (Fore and Aft). Intricate and complex rope controls (rigging), controlled the sails (turning them into all directions and layers of wind to maintain the maximum ability of movement on the water). Often, the style “Brigantine” was adapted by many Sea Faring Countries (causing confusion with ship types). Some Countries used not only wind powered Brigs (short term) and Oar (or human power). These were identified as “Brigs” as well. By the 17th Century, these ships were identified by their “squared sails”. Another identifier of a true “Brig”, was that the Main Mast was located towards the rear of the vessel (as opposed to the middle). By the 18th Century, the term “Brig” was regulated to a sail type and not necessarily a ship class. The Brigantine was among the most popular built ships in The American Colonies during the later half of the 18th Century. Considered easier to steer than a Schooner or Sloop, they also became popular with Privateers and Pirates (for this reason). Brigantines were used in Naval warfare as “screeners” (or protection for the larger warships of a Fleet). Size ranged from 75 to 150 feet long and they seldom ranged over 200 tons displaced weight. Although built for speed, Brigantines could be outfitting with light cannon. This Class of ship began it's decline of commerce and military use around the mid 19th Century. 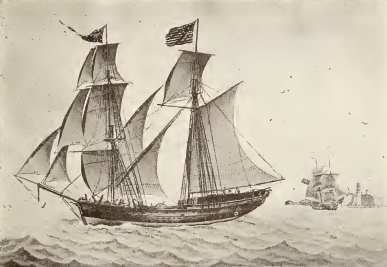