Dating back to the 16th Century (France), a “Bridgehead” was a temporary or permanent Fortification or Structure, used to protect a Bridge or related waterway, from Enemy attack or crossing. They could also afford protection for advancing or retreating Soldiers. Unlike the previously discussed “Bridge Castle”, Bridgeheads were more often constructed from thrown up earth, reinforced by wooden planks or logs. They often extended 8 to 12-feet in height and most often Square or Rounded in shape. More advanced versions constructed, featured climbing steps and “Rifle Shelves”, to allow Infantrymen to fire their Rifles somewhat safely (behind cover). Artillery was most preferred when defending a Bridgehead.

During The Crimea War and American Civil War, the use of Bridgeheads saw their most use. In both conflicts, the need to not tie down Soldiers to defend or hold River crossings facilitated the use of The Bridgehead. Most often, they were so my called a “Fort”. Such Fortifications were viral in the protection of The Northern Capital of Washington DC, which used hundreds of such Bridgeheads for defense. In time, Bridgehead Fortifications would be more permanently constructed of concrete, and could support a small defending Garrison. These Men could more only deploy Artillery, but engage Enemy Aircraft with Anti-Aircraft weapons. A common defense problem with The Bridgehead was naturally the development and implementation of Armor . Tanks could often ford a River and either engage or simultaneously pass by a Bridgehead defense Structure. Their use is rarely seen today, although some examples of Bridgehead Fortifications still exist in Europe. 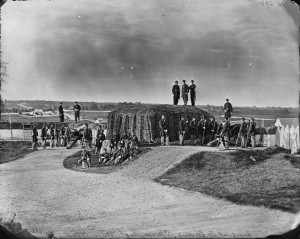