These form of defensive structures developed around the 14th Century, and were seen throughout Europe. In essence, Bridge Castles were moderate structures designed to protect important river bridge passages and to additionally provide observation of enemy advances. Often seen as a “first line” of defense for a City or Town (Fortified or not). In other forms, a Bridge Castle could have been a structure built adjacent to a bridgeway (and serving the same purpose). Many Bridge Castles evolved into Toll Castles (used to collect passage fare of persons and commerce) – entering a Village or Town. The evolution of Bridge and Toll Castles also include Fortified Bridges (featuring no permanent defensive structure and akin to a Bridge Tower).

Some Bridge Castles were elaborately constructed to include Bastions and various types of Defensive Towers (designed to incorporate various types of cannon platforms). Built of regional stone, Bridge Castles may be garrisoned with a small detachment of troops on a permanent basis. Some fine examples of Bridge Castles are still in existence – such as Mincio Bridge (Italy) and German Gate (France). 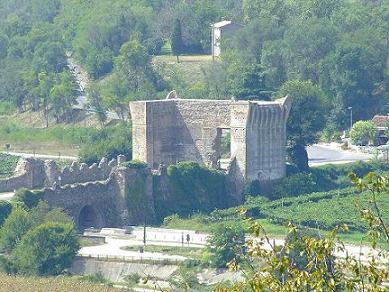