The ''Super Turcano'' is a Light Attack, Turbo-prop Aircraft currently in used by The Brazilian Military. Unusual in a generation in which many Nations are already using 5th Gneration Full Jet Fighters, The EMB 314 harkens back to a more elegant Era's Fighter. These are low cost Fighters which can be repaired very easily, not relying on Foreign parts imports.

The EMB 314 us crewed by (2). They are 38-feet long with a wingspan of 36-feet. Power os provided by a single Pratt and Whitney Turbo Engine capable of generating over 1,600-HP. They can achieve over 300-mph and have an operational ceiling of 35,00o-feet.

As a Light Fighter, seen more for Ground Support, The ''Super Turcano'' supports (2) 12.7mm Machine Guns and a mass variety of Surface to Air Missile packages. They also support conventional munitions and have rather robust Avionic systems as well. Over 300 have been produced since first introduced in 1999. 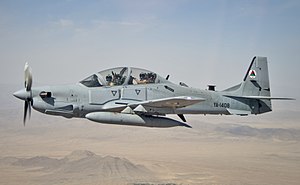