Another popular flag of The American Revolution against Great Britain was The Brandywine Flag. Carried by The 7th Pennsylvania Infantry Regiment, if was first seen at The Battle of Brandywine (September, 1777). Considered one of the first flags to incorporate a “stars and stripes” motif – the flag was red . An off-set upper Canton (Quadrant) featured 13 red and white stripes. 14 red 8-pointed stars were arranged against an all-white background. The flag was a Militia Flag and not adopted by Washington's Forces (although it was well known). The Brandywine Flag was not used after 1779. 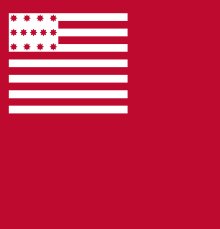