It's 9th Century ruins are near the town of Bramber in West Sussex, England. Bramber Castle was originally a Norman Era Motte and Bailey defensive structure. Built around 1070, only a large stone piece of it's defensive wall is intact. King John confiscated Bramber Castle in the mid-11the Century. Little is known of the Castle's history save for The English Civil War skirmish of which it was involved. In 1642, Roundhead forces set up artillery position at the local Church. They fired into and destroyed Bramber Castle. Much of it's surviving stone was taken away for use by local villagers. A large portion of the Gatehouse and related living Quarters foundations are still visible. The 30 foot Motte mound is still very visiable as well. A small Chapel, still used by local inhabitants - may have been the original Castle Chapel. 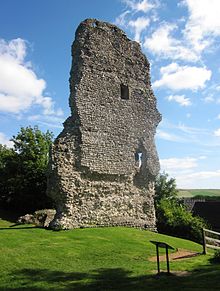