In their simplest firms, Braies were nothing more than “primitive” Underwear. Seen around the Early/Later Middle Ages (10th Century), they were actually Unisex. They were no doubt inspired by similar types known to exist in Ancient Greece and Rome. Traditionally, material used in their construction wad made of uncomfortable heavy Linen. Color was considered unimportant, as White was sufficient. Braies were attached at the waist by twin cinch cords. By the 13th Century,, Braies became shorter and more form fitting for Women (thus evolving into The Pantie). Braies were seen as acceptable “work wear” for Laborers. Hit and sweaty work, as well as a need to maintain often the only clothes owned, Men could strip down to only their Braies and working the Fields. If course, Nobility did not subscribe to this “showing”. By the 17th Century, Braies had evolved with fashion, to more traditional forms of undergarment. 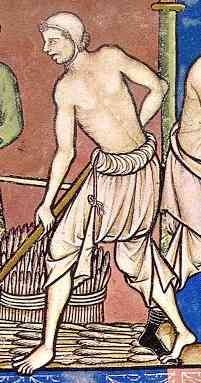